Skip to content
Welcome to Archipelago, a travel blog and online zine featuring articles on adventure, wanderlust, and life, focussing on the beautiful island nations of the world.

All images and words © myself and the contributors.

After twelve hours of bumpy roads and sporadic sleep, we were nearly, finally, in Legaspi. I awoke at around 8 a.m to see the eminence of Mayon volcano out of the left-side window, the tip of its perfect cone breaking through low clouds like an arrow to the sky, giving me the true scale of it’s grandeur. I had been years since I’d seen this sight.

We were met at the bus station by my cousin, before eating breakfast at Jollibee and retiring to my tita’s house for a siesta. After trying to catch up on sleep the bus journey had stolen from us, we head out.

Jen and I were to check into a hotel, Third and Sean’s Place, as my mother did not think my tita’s house could accomodate so many guests. It was an ancestral home that the owners had refurbished into guest house, and the renovation seemed to still be ongoing as construction workers greeted us when we alighted from our trikes. There was no one at reception, but we found the owner in the dining room.

“You must be Jen,” she said, upon our entrance.

She seemed a well-organised lola, and invited Jen, myself, and my relatives to sit at a large dining table made of wood and glass, expansive enough to seat twelve people, which stood steadfast in the centre of the spacious room. Around the room were sets of hardwood tables and chairs, and large vases on plinths; I made sure to not to go too near them, incase I turned around and my backpack knocked one to the ground. Above us hung a chandelier of gold and glass, and behind the bannister on the first floor landing, the woman’s wedding dress hung on a faceless mannequin, observing the surroundings below. A portrait of Christ hung in the atrium to our room.

She served us drinks, while asking about our travel plans and telling us the story of her mansion: her husband’s family had owned it for over sixty years, which surprised me, as I expected it to be older, given what I assumed was a colonial appearance. It had only been a hotel for two years, but she seemed very happy with how things had been going.

“The ratings on the website [Booking.com] are always so high”, she confessed to us with a smile. “We’re rated higher than the luxury hotels. It makes me very happy, and I hope it will last.”

It was a ‘humble-brag’ if ever there was one, but what she said was true; I had chosen this place for it’s high rating and very reasonable price. Plus, it was lovely to be greeted so personally by a genuine human being, and not be bombarded with robotic voices calling out ‘Hi, sir, hi ma’am!’ by insincere hotel clerks, like when we stayed at a hotel in Iloilo.

When learning that one of my titas lived in Legaspi, she asked my relatives her surname, and upon hearing it determined that it sounded very familiar.

We briefly left the conversation to unpack in our room, and when we returned it had been decided by our host that she was indeed distantly related to us via a cousin’s marriage to someone on my tita’s husband’s side, or something or other…

After we’d all joined my cousin, P, in Ayala Mall, who had been waiting patiently without a phone to contact him on, I took Jen in search of Bigg’s Diner. Bigg’s is a chain exclusive to Bicol, and one of my favourite things about the region (or it was, when I used to eat meat). Their locations take inspiration from 1950’s American diners – though, the styling of the Ayala Mall branch seemed distinctly modern – with a menu consisting of classic burger-and-fries offerings, as well as some typical Filipino fare and Bicol specialities, at a quality far exceeding the usual fast food joints, and for a resonable price. We’d end up eating here every day we were in Legaspi, and I would definitely recommend it to those who are visiting Legaspi and the Bicol region. As I look back now, even as a vegetarian, I can’t help but slightly miss those succulent, juciy cheese burgers and golden-coated slabs of fried chicken, just a little… 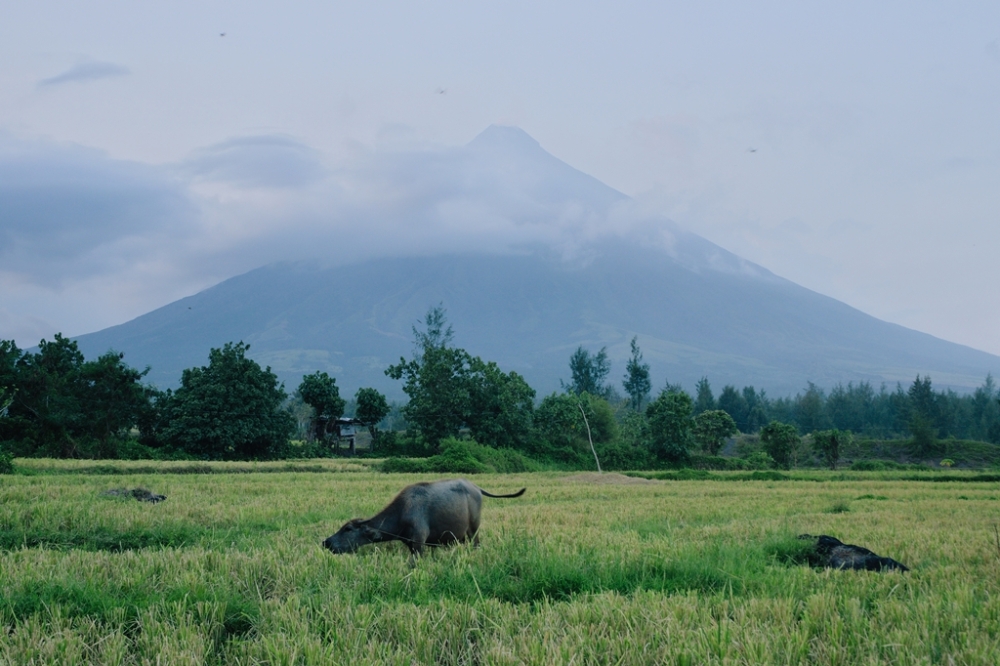 As we alighted from a taxi at Cagsawa Ruins, I was struck by how busy it was. I had seen images of it before, from post cards and Youtube videos, and must admit I had been fooled by them, as I’d assumed the ruins would be quiet and void of people. How foolish I had been, to think that there would be no tourists at this tourist spot.

The church ruins are all that remain of the former town of Cagsawa, as on 1st February 1814, the violent eruption of Mayon Volcano, it’s strongest to this day, destroyed the town in deadly lahars and pyroclastic clouds, killing thousands of inhabitants. Today, Mayon is still very much active, and erupts regularly. Despite knowing this, I can’t help but gaze at Mayon with wide-eyed wonder. As a child in school, I enjoyed studying volcanos in geography class; learning about immense destructive power and decimated landscapes will always add some spice to lessons mainly focussing on tectonic formations and igneous rock, so whenever Mayon is visible, my eyes are drawn to it. On clear days, white smoke bellows out, and the slopes of it’s perfect cone are verdant, almost inviting. It is a symbol of the Philippines, appearing on the 100 peso bill, and I am proud my family has roots in region it stands.

“She’s hiding,” said my cousin, as we regarded the immense mountain in the distance sitting behind a silk-like evening haze. “Hopefully you will get to see her on a clear day.”

We wandered around the ruins. The belfry is all that stands of the former church where people, unsuccessfully, took shelter from the volcano in 1814. In the succeeding years, the church’s facade fell apart or succumbed to vegetation, leaving the belfry to stand alone. Like Mayon, it transcends  the landscape, and viewing them together, you get a sense of their kinship, of their tragic shared history.

We left as evening drew in. I turned back to view the site one last time. At a statue of Jesus, a woman stood stock still, one arm outstretched, possibly in prayer. This vigil seemed to foreshadow the trail of thirteen statues I would witness the following day…
___

View all posts by archipelagozine